The Ford Model A also colloquially called the A-Model Ford or the A, and A-bone among rodders and customizers was the Ford Motor Company’s second market success after its predecessor the Model T. First produced on October 20, 1927, but not introduced until December 2, it replaced the venerable Model T, which had been produced for 18 years. This new Model A, (a previous model had used the name in 190304), was designated a 1928 model and was available in four standard colors.

Here’s something one does not see every day, and I have to say it’s certainly impressive enough that it’s surprising one does not see more of them. A unique pickup truck hot rod right out of Henry’s factory from 1931 and unlike its namesake there is no clowning around with this street rod ride. Queue up the doo-wop music, light up the big Pontiac V8 we are goin for one helluva ride! Also, we can haul something in the back, but for right now it’s gonna be just ass.or maybe a few red balloons.Well, I am Pennywise the dancing clown…

Textured gray paint over metal slabs adorn the exterior from the engine cover on back to the bed with the only deviation being the blood red painted firewall. This stretched cab sports a nearly vertical windshield tucked safely under and a metal visor across the top. Within the mini rear reveals a black wood bed with a Coors beer keg fuel cell with a sending unit inserted in the middle. The metal gate remains and is finished in more textured gray paint with more blood red paint dripping from below and the signature IT in more blood red paint on the left. Up front from the steel hood covers the engine but has had the side cowling removed to expose the heart of this creature. Leading the way is just a shiny radiator upfront with Pennywise the clown looking for his next child’s soul to steal. Flanking this radiator is a single headlight hanging off the midsection on either side that have MoonEyes covers. Fender-less corners up front with 14″ aluminum slot wheels and 15″ aluminum slot wheels in the rear partially resting under the rear fenders. These are wrapped in blackwall rubber with 215/70R14’s up front and 235/75/R15’s in the rear. Tasty, tasty, beautiful fear…

A swing of the textured doors reveal gray tweed panels that float black chrome billet style cranks and actuators. More gray tweed covers the toe kicks as well as the backmost part of the cab and gray carpeting covers the floors and is well protected by brown household carpeting remnants. The original dash has been modified with a texture finished red steel gauge cluster with black faced and white numbered styling from AC, Sunpro and Wico. A body matching texture gray painted dash surrounds the blood red and all this is fronted by black rimmed drilled 3 spoke steering wheel. A centrally located tall shift lever with a B&M T-handle topper is rising from the gray carpet next to the driver and the shift pattern hangs from the dash. Seating is high back racing style seats with ample bolsters and snappy red stitching which provide tons of comfort as you race through the sewers. Beep beep Richie…

All open and for all the world to gaze upon, a 455ci Pontiac V8, circa 1973, with a nicely painted block in Pontiac blue and silver, some chromed bolt ons, and horizontal ribbed valve covers…it’s a sight to behold all the while making a consignor stated 360hp. Obviously screaming at you are the triple carburetors all in a row, slapped on top of a tri-power intake manifold and facilitate air flow into 3- 2-barrel Rochester 2 jet carbs. These carbs are topped with individual chrome air cleaners just for some extra bling. On the back is a Muncie M21 4-speed manual circa 1970 which is actuated by a hydraulic clutch. Accepting all this scary power is a Ford 9″ rear axle weighing in with a 3.73 ratio. White coated headers snake into a single large side pipe which decides to end early right at the bottom front of the doors and just past the red painted firewall. This isn’t really enough for you, Billy? I’m not real enough for you???

Underneath is clean with just a light patinaed finish along with some road dirt and surface rust on the usual suspects. Black steel makes up the framing and we see gray for the floor supports and wooden flooring. Up front are transverse leaf springs with front shocks and on back are ladder bars with coilovers. Disc brakes are on the front and in the rear we see drum brakes and all is buttoned up underneath ‘fer shur’. Do you want a balloon too, Georgie?

Hopping inside, this triple threat candle lit right up. It has a great sound and is certainly loud enough for any taste. Smooth seemingly unending acceleration, decent handling, and tight steering. Brakes are solid, and driving is actually fun with the manual transmission. Here, take it. Take it Georgie.

This monster of a street rod with its highlight in the tri-power carbs, open engine, aluminum slots, no front fenders and ominous clown topped shiny radiator surround, all in pickup form, you will be the only one on your block to have one. But have no fear, the sewer lurking clown isn’t real.or is IT. 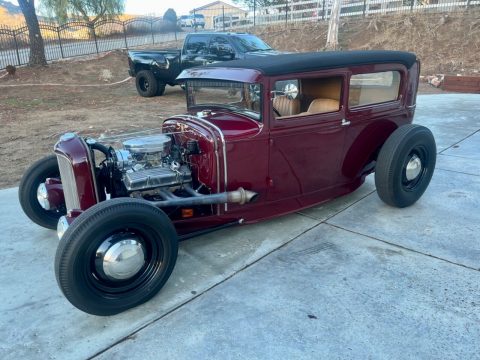 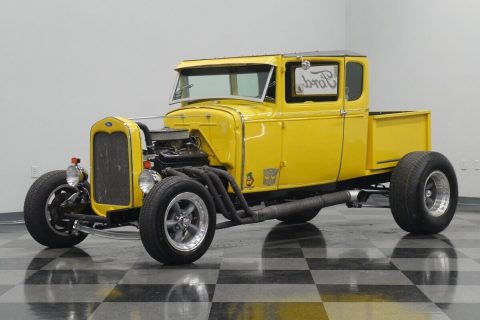 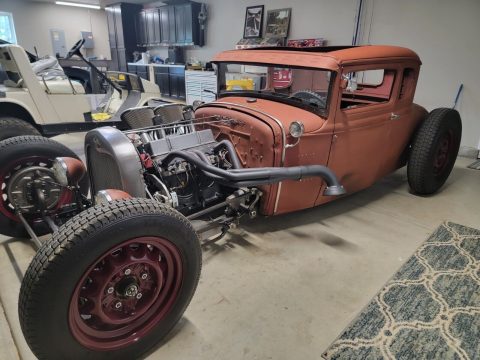 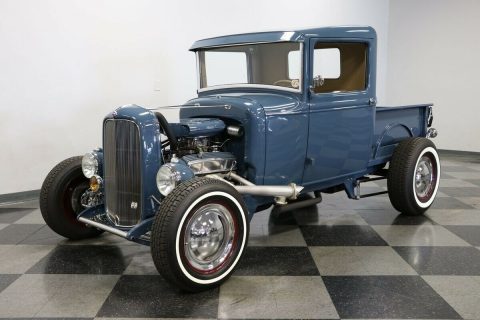 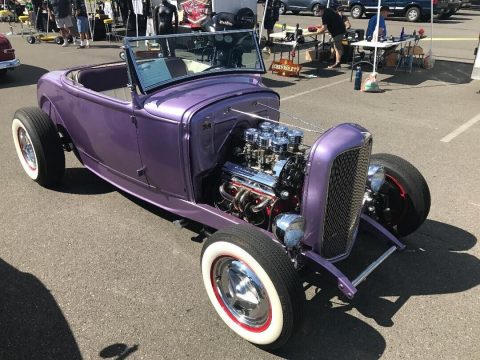